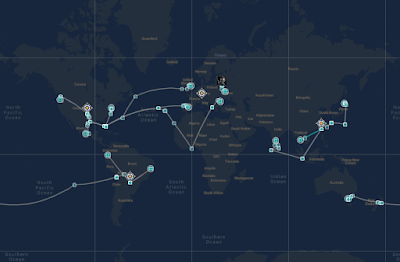 Avenir shards have come to a close, and as always, each shard is a story unto itself.  Nearly all of these shards involved significant international coordination, and most of them had very close cross-faction cooperation to ensure a successful shard score. Some shards quickly moved to their nearest target, while others took more creative routes around the globe.

Rule summary: Avenir shards moved every 5 hours along links between portals that were a minimum of level 4. There were 4 targets spawned on September 17, 2019 along with the first 3 of 13 total shards. The remaining shards spawned in three additional waves, on September 20, 24, and 27. The final jump was on September 30. The goal of this event was to score as many shards as possible, without regard to which faction scored the shard. Targets were not assigned to a faction as in previous shard games. Full rules in this post. 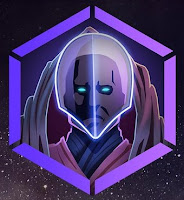 In the end, 12 shards scored, and 1 remained unscored.

So here is what happened with each shard:

Spawned: Wave 3 @ Pupiliera, Salvador, Brazil
Scored: Jump 46 @ Plaza Uruguaya, Asunción, Paraguay
Distance Traveled (net): 2425 km
Claim to Fame: The element of suprise. To onlookers, it seemed like this shard wasn’t doing anything. It had remained on one portal for more than a day, after having not moved very far at all, until agents were treated to seeing it less than 1km from the target.
Sitrep: [Awaiting Link]

Spawned: Wave 1, Flowers Slide, Bucharest, Romania
Scored: Jump 48, The Beacon of Hope, Oklahoma City, Oklahoma, USA
Distance Traveled (net): 9471 km
Claim to Fame: After sitting in Bucharest for 32 jump windows, 12 on the same portal, onlooking agents around the world had given up hope. “Bucharrested” had become a punchline, a telegram bot was set up to answer the question “Is Bucharest Shard Scored Yet?” And then, amazingly, it got moved to Italy. Thinking the Milan target was about to get a shard, agents got excited, only to see the shard route through Africa (the only shard to touch Africa), then across the Atlantic to score in Oklahoma City. This was a fun one to watch.
Sitrep: https://community.ingress.com/en/discussion/4748/omniscient-avenir-shard-6-bucharest-enlightened-sitrep
http://www.ingressxfaction.com/2019/09/29/avenir-shard-6-omniscient-incredere-bucharest/
Gloabl Sitrep: https://community.ingress.com/en/discussion/5035/shard-6-omniscient-incredere-global-sitrep/p1?new=1

Distance Traveled (net): 431 km
Claim to Fame: Only shard not to score, only shard to be reverted due to spoofer interference.
Sitrep: [Awaiting Link]

Spawned: Wave 4 @ Estacion de muestreo, Madrid, Spain
Scored: Jump 62, The Beacon of Hope, Oklahoma City, Oklahoma, USA
Distance Traveled (net): 7832 km
Claim to Fame: This shard backtracked on the one link in its path that could not readily be removed, making it score on the last possible jump window.
Sitrep: [Awaiting Link]

Spawned: Mesopotamia Memorial, Bangalore, India
Scored: Jump 48, 南紡夢時代-蜜蜂小鼠, Tainan City, Taiwan
Distance Traveled (net): 4626 km
Claim to Fame: Controversy regarding blocking link that was cleared by a “malicious actor” and subsequent scoring, following a breakdown in cross-faction cooperation in moving the shard. Niantic clarified that this shard score will count in a post on the community forum.
Sitrep: https://community.ingress.com/en/discussion/4758/shard-12-the-humanist-what-actually-happened

*Note: This post will be updated as more sitreps become available.