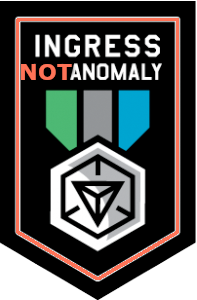 Actual Niantic put up a Not Anomaly this past weekend in Los Angeles. This is somewhere on the good idea scale in between “Not Niantic trying to run an actual anomaly” and “Niantic running an actual anomaly.” But while we wait for next year’s “tentpole events” to be announced, this at least gives us something to talk about.

At a normal First Saturday, agents from both factions come together to compete to earn the most AP and/or other stats for recognition and possibly locally-contributed prizes. This time, Niantic decided to try something a little different for one site:

We’re prototyping a new lightweight event format for portal control today from 3-4PM at the LA #IngressFS event. Join 130 other agents and RSVP at https://t.co/qG4NM9iAsG pic.twitter.com/zaKW3Dh3C8

In Los Angeles, the winning faction was to have a passcode revealed within faction chat that contained 150 level 1 resonators and 3 common heat sinks. Ingress Producer Brian Rose acknowledged that this is not a very secure method of distributing the reward, but with the relatively low value of the prize, he considered it adequate.

The measurements were revealed in the Telegram channel for the event.

Congratulations to the Enlightened for the first victory in a Not Anomaly.

Some agents seemed unaware that measurements were taken or revealed (which makes sense as the number of agents in the telegram channel was far less than the total number of participants). Nevertheless, agents on the ground seemed to enjoy this change of pace.

One concern voiced by those watching from afar was that adding a Faction-vs-Faction competition to a First Saturday (as opposed to individual stats competitions) could undermine the event’s ability to improve cross-faction camaraderie. Nevertheless, general consensus is that having more ways to keep the game fresh and encourage agents to come out and play is a good thing.