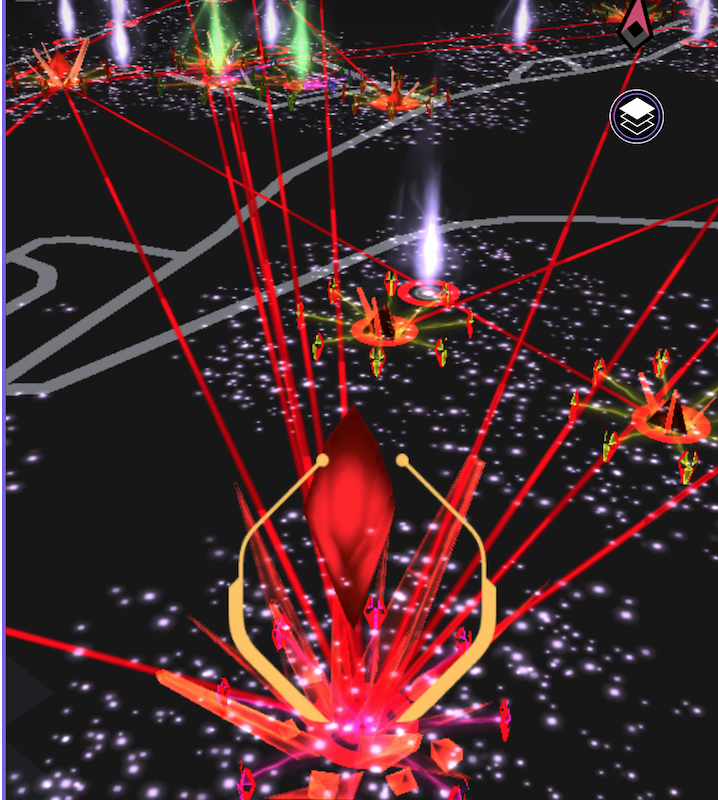 For Ingress’s 10th anniversary, at the conclusion of Phase 1 of the Epiphany Dawn anomaly, Niantic has finally introduced a red faction into the game. It’s not a playable faction, it’s an XM construct taking over the portal network that both factions can battle with. I covered some of the basics at YouTube but here’s a quick rundown of what we know so far.

Where to find red portals?

The red faction, appearing as U̶͚̓̍N̴̖̈K̠͔̍͑̂͜N̞̥͋̀̉Ȯ̶̹͕̀W̶̢͚͑̚͝Ṉ̨̟̒̅ in the scanner and also referred to as Machina, is an XM construct taking over the portal network. In the game, red portals seem to spawn on neutral portals in areas of relatively low activity.

Growth and linking: Once a red portal appears, it has a chance to link out to nearby neutral portals, turning those portals red, while the first portal increases in level. These links can cross existing links (blue, green, or red), but once in place, these red links will block additional blue or green links. This growth seems to happen approximately every 5 hours around the mid-point of a scoring checkpoint.

Decay rules: red portals appear to lose 5% of their XM capacity per day, but if the portal grows in strength (e.g., L1 -> L2), XM levels will reset to 25%. So a portal that does not increase strength will decay in 5 days, but a portal that continues to grow and link out can exist much longer.

Hacking: You can hack them, but like any enemy portal they have a chance of zapping you back. However, unlike typical enemy portals, if it does zap, it will deplete your entire XM tank. Note that if you are running a hypercube, it depletes only your standard tank and not the full hypercube. Also, regardless of level of the red portal, it appears that hacks yield only low-level gear. A L8 red portal will not yield L8 gear.

Attacking: This is very different from a regular portal. It behaves as a “loot piñata” — if you attack the portal, it will drop gear on the ground around the portal. The gear left appears to be: 4 keys, 6 resonators (at the portal level), 2 force amps, 2 turrets, and 2 shields (which can be common, rare, or very rare).

Where they appear: This still needs to be studied more thoroughly. So far they have appeared on neutral portals that have been dormant for a while (weeks?), but not in areas that are completely dormant. It’s unclear if this is a rule of their behavior or just coincidence. This will be updated as we learn more.

Stats: There are three new scanner stats: Machina Resonators Destroyed, Machina Links Destroyed, and Machina Portals Neutralized. As of this time there are no badges associated with these stats.